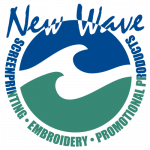 New Wave began when Cathy Donovan and her husband, the late Michael Donovan, moved to Ocean City in 1979 and opened the Village Barn, a home accessories store, in the 45th Street Village. The couple was not using the loft space above the store when it was suggested to them that they get involved in the T-shirt business. The Donovans attended a screen printing trade show that winter. New Wave opened in the loft in the spring of 1980. The pair ran the wholesale business with only one employee, artist Scott Harrington. Their first customer was the Bearded Clam on Wicomico Street in Ocean City, and the bar is still a loyal client of New Wave to this day.

In 2012, Cathys daughter Colleen and Colleens husband Matt joined the New Wave business and began expanding. Currently, the business is growing each year and the company has hired several employees to assist with the many new accounts that New Wave services.