First Shore Federal was founded in 1953 by a group of prominent local businessmen. Its purpose was to provide a source of funds for home mortgages in the Salisbury area while offering a good dividend and federal deposit insurance for local savings customers. The association ended its first partial year of operation with assets of $174,420.90.

With eight offices across the Lower Eastern Shore, First Shore Federal continues to provide consumer and commercial banking services to the people of Delmarva’s Lower Shore. The association opened its present headquarters at 106 South Division Street, Salisbury in 1964. Additional branch locations opened at Civic Avenue, Salisbury, in 1974, Pocomoke City, in 1977, Snow Hill and Berlin in 1987, Ocean Pines in 1996 and its first Delaware branch opened in 2003 in Ocean View. The Berlin branch moved to 310 Franklin Avenue in 2006.  A new branch in Millsboro, DE opened in April 2015.

First Shore Federal received a rating of “outstanding”, the highest rating available from the Office of the Controller of the Currency, in its most recent Community Reinvestment Act (CRA) examination. “The bank’s community development activities, as a whole, demonstrate excellent responsiveness to the community development needs of its assessment area…” according to the report.

In 2017, First Shore Federal received the 2017 NAACP Community Service Award, the first such award to be presented to a business. 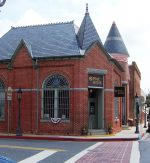 For more than 160 years, we have been committed to providing our clients with great service and powerful financial expertise to help them meet their financial goals. We are proud of our longstanding history of supporting not only our customers but also our communities, employees and shareholders.

At Shore United Bank, we believe that financial freedom lies in the ability to make your own choices. That’s why our portfolio of services is filled with options. From your checking account to your investment index, our offerings let you customize your financial journey. Reach your goals, whether it’s buying a house, growing your family, or taking that dream vacation. Count on us at Shore United Bank, to help you reach financial success, no matter how you define it. Banking should be about you – and at Shore United Bank, it is.

Mission Statement
We, the employees, officers, and directors of The Bank of Delmarva commit ourselves to create the leading community bank serving the financial needs of the Lower Delmarva Peninsula. We strive to be innovative, exemplify integrity and professionalism, and provide superior customer service.